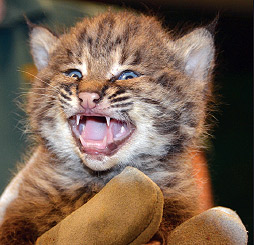 On May 13, 2014, the Ohio Department of Natural Resources (ODNR) Division of Wildlife (DOW) contacted the Lake Metroparks Kevin P. Clinton Wildlife Center to arrange care for an orphaned bobcat. It was found by the side of a road in Muskingum County (southeast of Columbus) not far from a dead female bobcat. DOW transported the baby bobcat to the center on May 14.

A second orphaned bobcat kitten, from Noble County (southeast of Columbus), was brought to the center on May 23. This kitten was found by a landowner mowing his lawn; the mother could not be found. 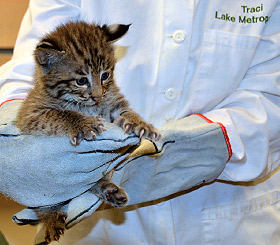 A local veterinarian performed full physical exams on both animals and determined they are both female, estimated to be about two weeks apart in age and fairly healthy except for being slightly malnourished and needing treatment for parasites. Wildlife Center staff worked to remedy both conditions.

The bobcats were slowly weaned off of formula and put on a diet of solid food, and were also housed together, which is good for their development. Young bobcats can survive alone in the wild at around six to nine months of age.

Wildlife Center staff got in contact with wildlife professionals across the country to learn best practices for “raise for release.” After consultations, the staff adapted an existing off-display cage to meet the recommended housing requirements for this species, as human contact needs to be avoided in order to keep their natural fear of humans intact. This housing situation is also useful for the introduction of live prey so these orphans can learn the vital skill of hunting out in the wild.

“That ODNR Division of Wildlife would choose to entrust care of these orphaned bobcats to Lake Metroparks demonstrates confidence in our Wildlife Center,” notes Paul Palagyi, Lake Metroparks’ Executive Director. “This affirms the center’s excellent reputation and the high level of care provided by our professional, educated and experienced staff.”